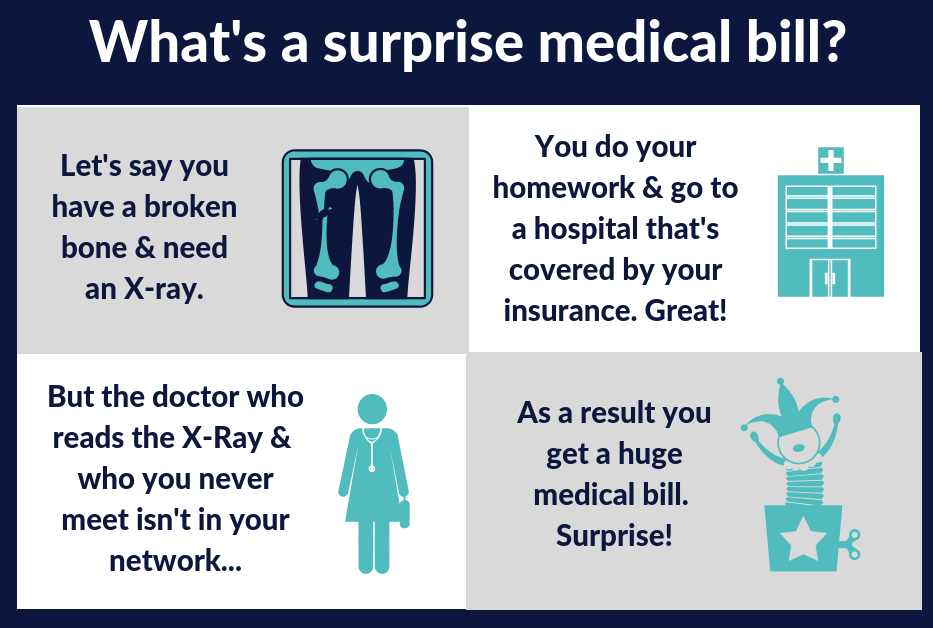 Surprise medical bills often happen following an emergency, like a heart attack or serious car accident, when patients don’t have the chance to choose who provides their care. Surprise medical bills can also happen at an in-network hospital when some of the providers who care for a patient are not in the network or when an in-network provider refers a patient to get lab work, a diagnostic test, or other care that isn’t in-network.   Typical bills can range from a few hundred dollars to thousands of dollars.

Surprise medical bills can financially devastate families and individuals who receive them.  A 2016 Federal Reserve study found that 44% of U.S. households cannot pay an emergency expense of $400 or more without borrowing or selling some of their possessions, and a 2018 poll conducted by the Kaiser Family Foundation found that 67 percent of people nationwide are worried that they won’t be able to afford a surprise medical bill.  That ranks higher among people’s worries than being unable to pay for prescription drugs, health insurance premiums or deductibles, or for basic expenses such as food, rent, mortgage and gas.

Currently, Pennsylvania law does not adequately protect patients from getting hit with surprise medical bills when they receive care from an out-of-network provider.  Patients need protections from surprise medical bills, but it must be done in a way that doesn’t increase premiums or reduce patients’ access to doctors.  If the solution were to make our insurance plans pay out-of-network providers too much, then out-of-pocket costs go up for everyone.

The good news is that the Pennsylvania General Assembly has just introduced such a bill: HB 1862, the Surprise Balance Billing Protection Act, which passed out of committee on a unanimous basis.  The bill, which represents a strong bipartisan solution that would prevent surprise medical bills is designed to protect patients while reining in out-of-pocket costs and maintaining patients’ access to doctors.  It establishes a fair and equitable process for resolving the issues behind surprise medical bills, ensuring that providers are paid fairly.

How to Take Action

PHAN strongly supports HB 1862.  You can take action to show your support for the bill by sending an email to your Representative in Harrisburg asking them to vote yes or calling our toll-free number (833) 922-1633 to be connected with your representative!