PHAN is working to support the Better Care Better Jobs Act, a historic investment in Medicaid home and community-based services (HCBS). The bill was introduced on June 24th by PA Senator Bob Casey and MI Senator Debbie Dingell as part of President Biden’s proposed American Jobs Plan. The bill would improve the lives of thousands seniors and people with disabilities while increasing pay rates and improving benefits for direct care workers.

During a virtual town hall hosted by PHAN, Lolita Owens (pictured above) discussed her experiences as a home care worker in Philadelphia. Lolita described the relationship she has with her clients, she knows their routines and preferences, advocates for them and they trust and depend on her.

Lolita noted that the funding would improve job stability and reduce turnover, which benefits consumers. She also noted that African American women like herself, who are overrepresented in the service industry, would especially benefit from this bill. 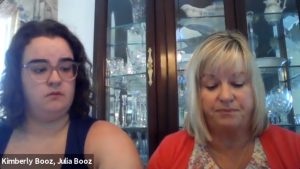 Julia Booz spoke about her family’s experiences using HCBS. Julia is 25 years old, is on the autism spectrum, and has an intellectual disability.

“Having someone to help me in the community is very important to me. I need to exercise, grocery shop, go to appointments, and socialize in order to stay healthy and happy. My staff Angela helps me and advocates for me.”

HCBS also helps Julia get to and from her job at Wawa as Julia doesn’t drive and public transportation is not available in the part of Chester County where they live.

Julia’s mother Kimberly went on to say that the support Julia receives through HCBS allows Kimberly and her husband to keep their jobs.

The bill would also eliminate wait lists for waiver services. Waivers are programs that allow Medicaid recipients to receive services not usually covered by Medicaid, such as in home care.

Yvonne Hubler is the full time, unpaid caregiver for her 32 year old son Lucas who has cerebral palsy, developmental delay, and is on the autism spectrum. Lucas needs help with his daily activities but there are no agencies near the Hublers’ home in Perry County that accept Lucas’ waiver. He needs to switch to a different waiver. However, in order to do so, he would have to abandon his current waiver and therefore risks going for years without services while on a wait list.

Yvonne supports the bill, saying “It sounds like what I have been advocating for for the past 6 years.”

Tammie Snyder is a sixty year old resident of Northumberland County who is totally blind and also has anxiety and depression. Tammie lives independently in her apartment and relies on her home care aide to help with cleaning and other tasks Tammie finds difficult to do on her own.

The proposed HCBS expansion would give Tammie additional hours with her aide, allowing her aid to take walks with her, help with cooking, drive to the grocery store and to medical appointments.

Tammie closed her statement by thanking Senator Casey for introducing the bill and urging others to support it,

“I hope that other lawmakers join him in this fight so that more people can live safely and with the dignity they deserve.”

Expanded eligibility and support would allow more seniors and people with disabilities to receive care at home or community based settings rather than going to a nursing home or other more isolated setting. The bill would also support direct care workers as well as families who care for their loved ones in their home.

Patrick Keenan, PHAN’s policy director, reported that the bill would allow an additional 33,000 PA residents to be eligible for HCBS, creating nearly 20,000 caregiving jobs and allowing over 40,000 family caregivers to return to work. Senator Casey stated that the bill will likely receive a vote in mid September.

If you’d like to know more about how you can support the Better Care Better Jobs Act, contact Robin Stelly [email protected]